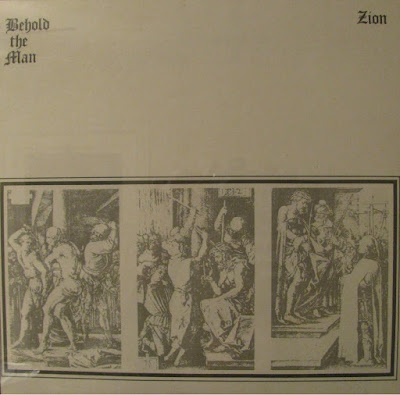 As we get our second episode ready we invite you to prepare by listening with us to Rich Mullins' first album Behold the Man by his band Zion. Our episode will feature an interview with his bandmate and friend Beth Snell Lutz. Beth was generous enough to contribute an introduction to the album and a commentary on each of the songs. You can find Beth's "Rich Mullins Early Music" pages here:
Youtube
Facebook

So, you are invited to journey with us as we give a close listen to this little heard early Rich Mullins album.


Zion Ministries was born in 1979 out of a desire to serve youth in churches and colleges through retreats offering both music and teaching. There must have been a need, as our weekends very quickly disappeared!  We were often asked for recordings of the music, but there was no money to fund such a project. A "Get it on Vinyl" concert was scheduled to raise money when Richard's Uncle Dick offered to provide the rest. We connected with a recording studio downtown in Cincinnati called 5th Floor Studios, and in the Summer of 1981, began recording shortly after with the help of friends Greg McNeilly producing, Tony Ross on bass and David Workman on drums. Myra Hartfield provided the cover art, and Richard wrote out the lyric sheet to accompany each vinyl album. Three of the included songs would find their ways to other album projects as the years went by. Here is "Behold the Man".

How the Album Got It's Name:
It was important to all of us, but especially to richard, to tell the story behind his choice of the title, “Behold the Man” as well as a statement of faith for anyone who might be interested. It would’ve gone on the album jacket, but by the time we got to that stage of the project, the money was gone.  It was placed on the back of the included lyric sheet as follows:

Praise to the Lord
Written by rich mullins and J.S.Bach


While taking a music theory class at the Bible College in 1978, richard found himself being challenged by some of the great composers.  He’d taken piano through his early years and was now drawn to improve his skills by endlessly practicing compositions from Greig, Mozart and Bach. He would remain on task for hours, when his fingers would find their way to creating their own interpretations of the score. Such is the case for the intro to “Praise to the Lord”, as it was originally titled. He’d written much of the song, even performed it once, when he began to play Bach’s C Minor Fugue as a preface to the song. He liked them together, and together they remained.  Here is “Praise to the Lord”.


For Unto Us
Written by rich mullins
Taken from Isaiah 9:6, “For unto us a child has been born, unto us a Son is given”.  Always one of my favorite songs of richard’s, this is to me a snapshot of his love of bringing scripture into his writing, rounding harmonies and use of dulcimers. At just over 2 minutes, this was one of the most fun to sing and certainly one of his shortest creations.  Here is “For Unto Us”.

The Way to Love You
Written by rich mullins
One of the most lyrically lovely and poetic songs he’s ever written, the piano tells the story of the song as beautifully as the words.  Here is “The Way to Love You”…also known as “the duet”.


Lord, Help Me Be
Written by rich mullins


Richard often wrote of darker and “less likely to be discussed in church” struggles. The themes might be buried in the slowly building body of a song. Other times, they’d be front and center in the chorus of a seemingly light-hearted and faster paced melody. But, the truth of the insidious lure of sin lived alongside impossible hope in most of his work. Here is “Lord, Help Me Be”.

Nothing In This World
Written by rich mullins


Lyrics… Lyrics… Lyrics.  Amazingly direct and powerful lyrics, placed in a melody that flies by so quickly they are difficult to hear and easier to ignore. When I hear this song in my mind, it is slowed down considerably… has no synthesizer … and doesn’t reek of the 1970’s.  He was, however, determined it would be as it is and sadly, I have no taped recordings of it otherwise.  The day the synthesizer came into our house and band, it felt as though some beloved musicality found its way out the back door. Ahhh… “progress”.  Regardless, the lyrics are worth it all. Here is “Nothing In This World”.

You Can Live Without Him
Written by rich mullins


"I’ll never forget the moment he first played this song for us in the living room at the Beech House. As he’d written it intending for me to sing, I recorded that moment so that I could learn the song.  I recently discovered a rough recording of that first listening, 40plus years later. It is the only recording not only of richard singing the song, but of his piano accompaniment…as this song, too, was a victim of the dreaded synthesizer.  In the studio, we used the very first take of the song. Greg played with it after we left, and when we came in the next morning, he’d added an echo stolen from “I’m Not in Love” a 10cc song out at the time. Clearly, we were just escaping the ‘70’s. This song leveled me… every single time. I could not sing it without recognizing the truth that we choose in each moment whether we will live with or without Him. Here is “You Can Live Without Him”.

Hope to Carry On
Written by rich mullins


….more fondly known as “Waxy Jesus” because of Tom’s wonderful phrasing of the lyric, “O-I can see Jesus”. Such a great song as the lyrics are terrifyingly sobering, placed in a melody that circles in your mind.  As we did it for years in nearly every concert, it became beloved not only for its honesty, but for the memories of laughter and broken guitar strings it held.  It was a lovely gift years later to have it recorded by Caedmon’s Call who chose also to make a video that included richard enjoying their enjoying his song. Here is “Hope to Carry On”.

Heaven In His Eyes
Written by rich mullins


Written in 1977, this remains the quintessential rich mullins song.  Few I know have been able to tell the story of Jesus in such a way. I miss what I know he would be writing now, helping me understand about my God and my world today.  Here is “Heaven in His Eyes”.


And if you haven't yet, please listen back to our first 2 episodes, featuring an interview with Jimmy Abegg and an inside look at the lost LeSEA videos.
at July 13, 2017